5 Shocking Things You Don’t Know About Student Loans (But Should)
August 23, 2013

When it comes to your student loans, you may feel hopelessly in the dark. You signed up for loan after loan to get through school but your focus was on getting through college so you didn’t worry about the details. It’s been much the same for our country as a whole. We want our students to go to college and get an education, lawmakers make loans available and they are gobbled up but there has been little focus on the bigger picture – what would happen later – on both a personal and a national economic level from the proliferation of educational debt…

As a result, there are implications for all those personally who owe loans and for us all if the student loan bubble bursts and takes down our economy with it. In that vein, here are five shocking things you don’t know about student loans, but should:

#1 Interest breaks on subsidized loans have been wiped out by lawmakers!

For years, students in great financial need have paid interest rates half of the level of their unsubsidized counterparts. Prior to July, subsidized rates were at 3.4% compared to 6.8% for unsubsidized loans. First lawmakers let the interest rates double because they failed to act by July 1st and then when they went back to address the issue, they still raised rates on subsidized borrowers. And what’s worse (as we’ve written about recently) if the Treasury notes underlying the rate determination rocket as they’re predicted to, interest rates will be closer to triple what they were just a few months ago! 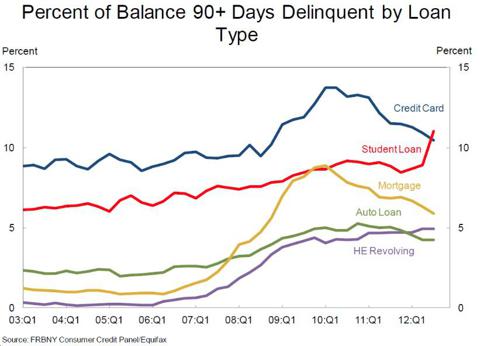 #2 Student loan defaults are on the rise and the outlook is frightening!

According to a recent report released by the Consumer Financial Protection Bureau, over seven million student loan borrowers are currently in default. And if you combine those that are in default, deferment and forbearance (the latter two are often last ditch efforts prior to going into default), 26% of direct loan holders are in serious trouble. That number is much worse on FFEL loans with defaults at 14% of loan holders and combined with deferment and forbearance total 35%. These numbers are climbing with no indicators of imminent dissipation… #3 Student loans have mushroomed into the largest source of household debt!

Student loans are second only to mortgages when it comes to household debt. Student loan is higher than credit cards, home equity lines of credit, credit cards and even auto loans. And over the past four years even as total consumer debt has diminished, student loans have grown. And with every other type of consumer debt being eligible for forgiveness in bankruptcy, it’s concerning. You may have to surrender your car or home to vanquish the associated debt, but at least you have an out if your finances crumble.

#4 Most student loan borrowers are not taking advantage of affordable repayment options!

If you have federal loans, you likely are eligible for affordable repayment plans including Income Based Repayment (IBR) and Pay As You Earn (PAYE). Both tie your monthly payments to a percent of your income (15% and 10% respectively). But these are poorly marketed plans that aren’t being utilized fully. Out of 15 million student loan debtors, less than one million are in IBR or PAYE. More worrisome still are the three million people enrolled in graduated and extended payment plans that drive up interest and payments with no end in sight and no opportunity for loan forgiveness. 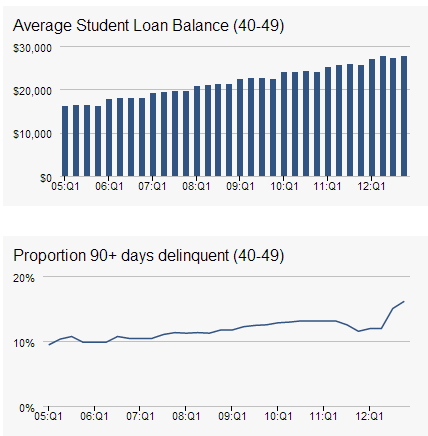 #5 The most common age for student loan defaults is not fresh grads but those aged 40-49!

What’s scary is that those who have been out of college for a couple of decades are the ones most likely to be delinquent and heading into default on their loans. Student loan balances for those age 40-49 are nearly as high as those a decade younger and much higher than those under 30. With IBR and PAYE only recently available, it’s quite likely that these higher balances are driven by interest and fees piled on because there were no affordable repayment options for cash-strapped borrowers. With high loan balances this means that this generation may carry their educational debt into retirement and perhaps to their graves…

If you’re in sticker shock over your own student loan circumstances, you can look to Tuition.io for information and assistance. Sign up for our student loan optimization tool to track all of your debts – private and public. Also check out our blog for tips and strategies on repayments. Also be sure to peruse our recently launched Student Loan Help portal to find guides on How to Apply for Income-Based Repayment and How to Pay Off Student Loans and many other great topics.