Rethinking Student Loans – Is There a Better Way to Borrow?
February 7, 2013

If you take stock in headlines, America is in a student loan crisis and the bubble is about to burst. There are a trillion dollars in outstanding student loans and half of this in deferment or delinquency. Even if it’s not as bad as the talking heads would have us believe, it’s certainly not sunshine and rainbows. Student loans first came into existence in our country in 1958 with the National Defense Education Act and since then as more loans have become available, eager student borrowers have queued up to get into school (and into debt). Student loan interest rates vary widely from 3.4%-6.8% and can be even higher on private loans.

Average student loan debt is around $20,000 and with interest rates like these, a 10 year payment plan can run anywhere from $200-$230 per month for Federal loans. But for many new graduates struggling with employment challenges and supporting themselves away from home for the first time, these payments may be unmanageable. This has me wondering if there’s a better way. I did some research on how student loans work in other countries and was intrigued by Australia’s plan and how successful it has been.

Australia’s student loan system is relatively young – barely into its teenage years – the so-called “Dawkins revolution” spawned the creation of their student loan system in 1989. John Dawkins was a groundbreaking and beloved Australian Education Minister. The initial system was called HECS but that was replaced in 2005 with HELP (Higher Education Loan Programme).

Under the current program, students who pay fees up front without borrowing get a 20% discount. Students can pay some of their tuition up front and borrow the remainder or borrow the full amount for their tuition and fees. Any student can participate in HELP. As an odd side note, tuition for Australian college courses are set by the earnings potential for the program of study rather than the cost to provide the course. That’s certainly a different take and one that is worth further consideration. 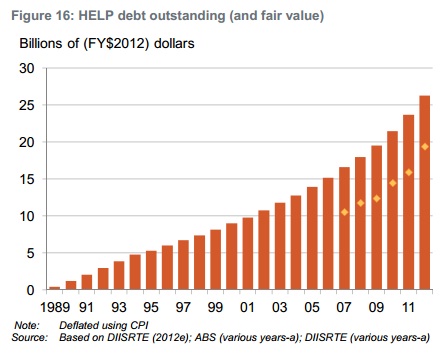 How Interest Is Charged on Australia’s Student Loans

This is one of the critical differentiators between American and Aussie student loans. Student loans in our country incur interest at either set or adjustable rates determined by the lender. Federal loans are cheaper and subsidized Federal are the cheapest. Unsubsidized cost more and private loans are the most costly. Down under, each student loan incurs a flat 20% fee. This means if you borrow $10,000, there will be a $2,000 fee attached to your loan. Interest is not accrued but rather the debt grows with the rate of inflation (CPI).

This aspect of the Aussie student loan system is where I see real genius. Rather than newly minted graduates getting their diploma alongside a pile of debt, there is breathing room to allow the recent alumni to get on their feet. Australian student loans do not require repayment until the borrower reaches a minimum income threshold. The current threshold is AUS$50,000 (roughly US $51,350) to begin payments. Once you hit this income level, you will be required to pay 4% of your income or about US $170 per month. That’s much more manageable on a salary of this size than a typical starting salary for a recent graduate. Some US loans have income based repayment options, but none this flexible.

What’s also nice is that if you make a lump sum payment of AUS$500 or more, you’ll get an extra 10% credit posted to your debt. A $500 payment nets you a $550 decrease in your loan. For higher earners, once they hit an income level of AUS$83,400, 8% of annual income must be paid on your debt for a monthly equivalent of around $550. That’s not unreasonable given the more substantial take home pay. Best of all, if your income level never rises to the AUS$50,000 threshold, you’ll never have to pay a penny on your student loan!

What Are the Downsides to the Australian Student Loan System?

Critics of the system say the program encourages graduates to leave Australia because if you are not required to file an Australian tax return, you owe no payments. Does this mean this loan program is encouraging brain drain? I’d have to see some statistics to support this assertion. It seems like there are plenty of students who would stay in-country even if that meant paying their debt. Australia’s natural beauty, Darling Harbour and the allure of the outback cement most of it’s people to the wild down under.

Other critics say the system is unsustainable because roughly 20% of the loans will never be repaid. Australia’s student loan debt is currently near AUS$26.3 billion of which AUS$6.2 billion is estimated to be noncollectable under the current scheme. Professor Bruce Chapman, architect of the HECS system, says of the portion of the debt that will likely go unpaid, “It was built into the system. Of course if people don’t have the money, they don’t repay and that’s part of the consequence of an income-contingent debt.”

So is the Australian way better? From the borrower’s perspective, it certainly seems more forgiving than our current system. But then again, it was crafted intentionally to focus on availability of education rather than profits. Our current student loan system may be on the brink of imploding or it may be a phase in its evolution. Only time will tell and I think that rings true of the still-young student loan system in Australia as well! If you are a student or graduate who has student loans, consider consulting an expert to help you borrow wisely and optimize your student loan debt.